The Mahabharat is one of the two major epics in Sanskrit of ancient India. It contains over one lakh couplets and is thrice as long as the Bible. However, only a fraction of the narration actually deals with the main story with the rest containing additional myths and teachings. It states very clearly in the beginning itself that : “what is found here may be found elsewhere but what is not found here cannot be found elsewhere.” Most people believe the Mahabharata to be more realistic, compared to the Ramayana which seems too idealistic. It is believed that Vyasa (which means compiler) was the one who compiled all vedic stories (including the Mahabharata) that had been lost and is also said to be the common thread of all Indian philosophies. The Mahabharata also forms an important constituent of our ‘itihasa’ and the author’s participation in the epic, informs readers that its not a tale of fantasy but is in fact, a report on the events that occurred. Following is a compilation of some of the most interesting facts of the epic :

Contrary to popular belief, Duryodhana did have some positive traits like implicit faith and great love for his queen and his friend Karna. Once Duryodhana’s wife Bhanumathi and Karna were playing a game of dice. As the game progressed, it was evident that Karna was winning. Just then Duryodhana entered the chamber. Seeing her husband, Bhanumati was just rising, when Karna, thinking that she was trying to get away from the embarrassment of defeat, snatched at her drape, studded with pearls. Tugged at, the thread snapped and all the pearls rolled on to the floor. Bhanumathi and Karna were both immeasurably upset. But the Kaurava scion only asked : “Should I just collect the beads, or string them as well.”

It is also held by popular belief that Su – refers to good and Dur – to bad. Duryodhan and Suryodhan are both names for the same person and often used interchangeably. Suryodhan means one who is good with arms (in warfare) and Duryodhan means unconquerable warrior. Naturally there can be many who are good in battle but only ONE who is unconquerable. Hence, Duryodhan being more unique, stuck.

Maharishi Vyas’s writing and thinking speed didn’t match. So he approached Lord Ganesha for help. Lord Ganesha agreed on the condition that he would write as long as he didn’t have to wait for Maharishi to narrate the next sentence. Maharishi Vyas also put forth a condition that Lord Ganesha would write the sentence down only when he fully understood it. So whenever Vyas needed time to think he would recite a complex verse to Ganesha (i.e also why the original transcript of Mahabharata has over one lakh shlokas.) Gandhari did in fact conceive naturally. During her gestation period, she heard of
Kunti giving birth to Yudhisthira. In a fit of envy, she bumped herself against a wall
and went into labour. What she conceived was not a baby but a shapeless lump of
flesh. At this point, Maharishi Vyas came to her aid and divided the lump into a
hundred pieces which he then stored in a hundred jars of ghee which were duly
buried. Gandhari’s children were thus born in these jars over a period of time. 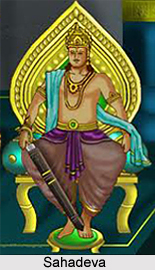 After years meditating in the forest, Pandu asked all his sons to eat his flesh when he died. By doing so they would be blessed with great knowledge. But when Pandu died none of his sons had the courage to do so. Later on when Sahadeva saw some ants taking a piece of flesh from his fathers’ body, he put that piece in his mouth and got powers which he could never have imagined. He saw all that had happened(about kuru and yadava’s, Bhishma’s vow etc.) and was about to happen (gambling loss, Kurukshetra war, etc). When he met Krishna, he was made to vow to never speak of anything he knew and if anybody asked a question he would always reply with a question. As he knew all that was about to happen, he used occult sciences to show people how a small ripple lead to a disastrous or good result.

There is an ancient story which says there was a demon king who performed a severe penance to appease Surya and obtained a boon that he could have 1000 lives and a kavach in each life so that nobody could kill him without doing a penance for a 1000 years . Also each battle to kill him would last a 1000 years. Once he started rampaging , the devatas approached Vishnu to save them . As a result Vishnu took 2 forms – Nara and Narayana . Initially Nara performs a penance for 1000 years while Narayana killed the demon king. Then Narayana went into penance and Nara killed him. This happened for a total of 999 times. When he was about to be killed the last time, the demon prayed to Surya who saved him from Narayana. He was then born as Karna in Mahabharata while Krishna was Narayana and Arjuna, Nara .

4. Ramayana occurred before the Mahabharata did :

There is a version of the Ramayana within the Mahabharata. It’s called Ramopakhyana and can be found in the Draupadi-harana Parva of Vana Parva. The context of it – Yudhisthira was lamenting the exile of the Pandavas and Draupadi when Rishi Markandeya narrated the story of Rama’s exile to console him. (Which also proves that Ramayana occured before the Mahabharata did.)

Gandhari had been married to a goat before getting married to Dhritarashtra. The goat had been sacrificed promptly thereafter but this made Gandhari a widow and Dhritarashtra her second husband. So when they came to Hastinapur as guests, Bhishma locked all of them up. But since it was considered a sin to starve your guests, Bhishma did send food daily, but kept on reducing the quantity. When the family realised this trick, they decided to feed a single person who would survive and avenge them. They selected Shakuni, the youngest and cleverest son. Broke his leg to always remind him in every step of his life, the atrocities committed by the kuru clan. Before dying his mother asked him to take a particular bone from her body, which would always listen to him. He made dice from that bone and those dice always fell on the number he wished for. Armed with dice and revenge, he set upon bringing down the clan by sparking a war between the cousins.

2. The Real story of Dhritrashtra, Pandu and Vidur’s birth : The story of birth of Dhritrashtra, Pandu and Vidur

Upon Vichitravirya’s death Satyavati summoned Vyas (who happened to be her eldest son) and informed him of his duty to impregnate Ambika and Ambalika in order to grant an heir to Hastinapur. Dhritrashtra was born blind because his mother Ambika was terrifed when she saw Vyas and shut her eyes in fear. Pandu was born slightly frail as his mother (Ambalika) shuddered when she saw Vyas. The third time the two of them decided to send a maid instead of going themselves , the maid went on to give birth to Vidur who would later become the prime minister of Hastinapur.

1. Guess the strongest warrior in the battle of Kurukshetra :

The greatest warrior in the battle of kurukshetra

Barbarik who was the grandson of Bhima expressed his desire to watch the war of Mahabharata to his mother and promised that he would join the side that was weaker if he felt the urge to join in. Krishna wanting to examine Barbarik’s strength in person, disguised himself as a Brahmin and approached him. When he asked how long would it take to finish the war if Barbarik were to fight it alone, he replied it would take him only a minute. Krishna was surprised at this answer, considering the fact that Barbarik only had 3 arrows and a bow. To this Barbarik explained that one arrow was to mark all the objects that he wanted destroy, the second arrow was to mark all the objects that he wanted to save and the third was to destroy all the objects marked by the first arrow. Krishna amazed by his prowess, explained that since he was the greatest warrior on the battlefield, which ever side he joined would make the other side weaker. So eventually he would end up oscillating between the two sides and destroy everyone except himself. Krishna then asked for Barbarik’s head in charity to avoid his involvement in the war, which he then placed atop a hill with the battlefield in full view.